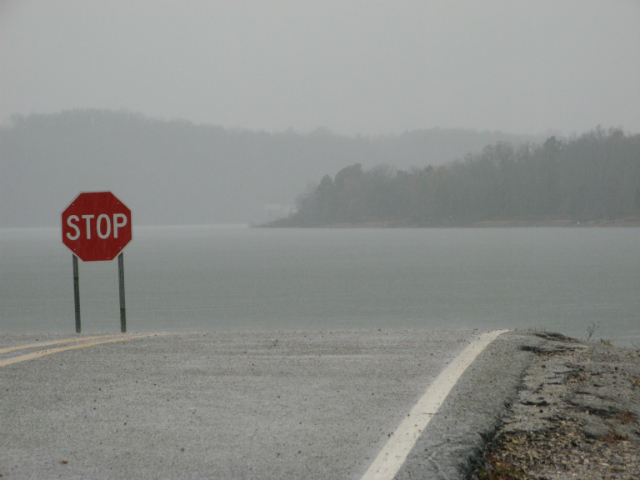 My boat-ramp route takes me down my driveway and further down my street to a paved road. At that intersection, I turn left past a house. Just beyond that is a pond created by water that flows from a rock outcropping. Around the bend are another house on the left and woods on the right. This area is where crows usually hang out, but on this day buzzards had taken over. Spooked by my intrusion, those on the woods side flapped away in a whoosh of wings. However, on the house side and midway up an oak tree, four stalwarts refused to budge. When I returned from the boat ramp half an hour later, they were still sitting stolidly on their perches  refusing to be dislodged.

Buzzards usually fly off at my approach;
they have few defenses, after all.
Today, in the drear and drizzle,
they stood their ground—not on the
actual ground, of course, but on gnarly
oak branches. They shifted a bit,
assessing danger versus discomfort,
came to a consensus, and gave me a pass.

This time of year, the weather veers quickly from mild to merciless. We woke up to sleet and ice yesterday. It gave everything a glassy coating that soon melted away. The clouds melted too and suddenly we were enjoying a sunny day.

Today’s outing by car included a visit to the local library. The site has a large pond that attracts numerous ducks and geese. I called out to the Canada geese as I neared the library entrance, “Why aren’t you in Florida?” That may not be where Canadas winter, but I often wonder where local wildlife find rest and protection when storms, nightfall, and dangers come. I recall now that I saw a small butterfly in the recent drizzle. Apparently it was biding its time, exposed on a weed-head, till the inconvenience passed.

Simply waiting things out is often the best response to circumstances. For example, Siddhartha expressed great wisdom when he said (in Herman Hesse’s book), “I can think. I can wait. I can fast.” Essentially, those words were a resume for providing adept service to the world and to self. They still are. I find them insightful and inspiring, and I hope you find them valuable too. ♥ ~Jo

* * *
Photo credits: All by Jo Lightfoot