Like Fair Ophelia, the daisies are drowning.  Daisies! —the very symbol of freshness and life. Recent rains here transformed a patch of daisies into something more like a lily pond. The daisies are valiantly trying to survive—some managing to hold their heads above water; others standing no chance at all. In the nearby lake as the waters rise, fish are investigating newly expanded territories… splash, splash! … and herons are investigating the fish. Question…

Why did the heron cross the road? 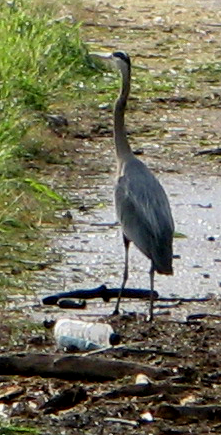 To grace me with this photograph.

More exactly, with this one:

What a surprise to have captured such a terrific memento of today’s early morning walk.

I first saw the heron at the end of the boat ramp road. That road now descends into the lake, since the traffic sign there has been ineffective in getting the recurrent rains to STOP.

The heron flew over my head in the direction from which I had just come, so I watched for it as I made the return trip. I snapped one photo as it stood at the edge of the road. When it flew away I tried to snap another, but the camera’s shutter delayed and I doubted the heron had remained in the viewfinder. At best, I feared, its image would be just a blur. But I lucked out, rather than being out of luck like the daisies. Yet is that true? …

Life offers itself up to life in sacrifice, making death a sacred, prodigiously generous act. That’s a notion I hold to. And anyway—to be a bit irreverent—something had to die to push up those daisies. Also, won’t the heron eventually “swim with the fishes”? Nature’s life-and-death cycle is the very thing that keeps life so precious and poignant.  ♥ ~Jo