It’s three weeks into official winter and we’ve experienced highly fluctuating weather here in Arkansas. An early snow-and-ice storm blew through in early December. Another arrived in early January, dropping the overnight temperature to -12 degrees. Directly after that, a warm rain washed away the icy remnants and sunned the landscape with afternoon temperatures approaching the 60’s. Today’s wind—thankfully from the south—continues the recent refreshing blow-dry. 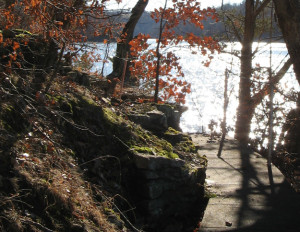 After being cooped up indoors for the prior week, I was glad yesterday not only for a walk outdoors, but to be outdoors without coat or jacket. Although I took a windbreaker along, I never wore it. Sun rays on my black turtleneck sweater provided ample warmth. To make up for a week’s inactivity, I stretched the distance of my walking to include a neighborhood lakeside path and promontory. 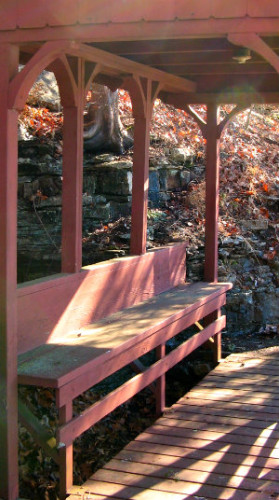 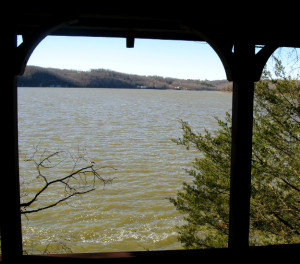 and old broken concrete slabs form part of the path, which ends abruptly at a rock outcropping overlooking Beaver Lake. Near there are a covered wooden bridge and an uncovered one. Both structures are weathered and rarely visited. Because the covered bridge features a wooden bench and an exceptional lake view, it is an ideal spot to linger and muse or simply observe.

Eight white seagulls swooped near western-shore cliffs yesterday, flitting in and out of the sunlight. Occasionally, one would alight on the water before resuming flight. The lake level was up and so was the wind. Waves in the distance had whitecaps. Those nearer were nutmeg brown, highlighted pale blue with reflected sky. Wave bellies showed ochre to pea green according to how much sunlight shone through. 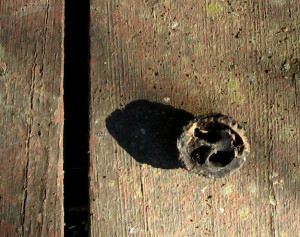 Winter beauty tends to be muted relative to other seasons, but it still abounds. Old moss and new grass peek out from brown tents of fallen leaves and twigs. Weed stems and seed pods call attention to nature’s spare, graceful architecture. Sometimes I gather small natural objects to take home for closer examination. These supplement my travel tales for Ethan. Yesterday, I carried a white snail shell home but left this black walnut shell behind.

Ethan always asks, after a walk, “What was your animal medicine today?” Usually I mention Dog or Crow, Squirrel or Buzzard. But today I replied, “Gnat.” We were both surprised that these little insects have survived the recent freezes. But—as those mosses, grasses, and gnats attest—many life-forms lie low in off seasons, make their entrances early in others, or simply survive unnoticed. The seasons themselves come and go in waves of fluctuation— artistic expression, perhaps… or signals of friendship as Spring, Summer, Fall, and now Winter offer their annual “Season’s Greetings.”  ♥ ~Jo

Photo Credits:  All by Jo Lightfoot