You know dreams. Maybe I was observing this person or maybe I was this person—a young, fit man who kept leaping from side to side over a monolith while facing forward. The dark granite-like stone column tapered slightly toward the top and the man’s chest passed very near the top at the apex of his leaps. His sideways leaps were slow and graceful, as if launched from a trampoline, and they were accomplished in slow motion.

When I became curious about the top of the monolith, I immediately found myself at a viewpoint to the left of the young man’s back as he neared the apex. Then his motion decelerated greatly (or my mind accelerated).

I was stunned and delighted by what I saw. The top of the stone was sliced at a slight incline: higher at the front (my former viewpoint) and lower at the back (my present viewpoint). It was polished into an ovoid shape. On this pass, and presumably on all the prior ones, the man was adding liquid gold (via finger) to a design on the polished surface. The symbol was a triple-line flame, very like this: 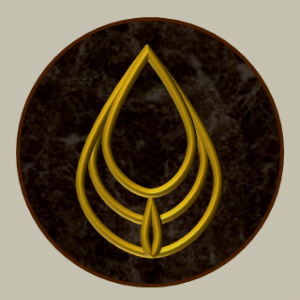 Obviously, this pass was his last, because he completed a final stroke with a masterful flourish, resumed his arc downward to the right, and disappeared into the void. I believe it was my wonder and joy at witnessing this scene that woke me up and inspired me to record what I saw, even as primitively as this.

“Dream Forensic Artist” … “Dream Illustrator” … are there such professions? They’d definitely be worth developing skills for.

If you’ve had a vivid, memorable, interesting dream, I’d love to hear it.